The Great Leonid Meteor Shower of November 17, 1966 as Seen from Table Mountain 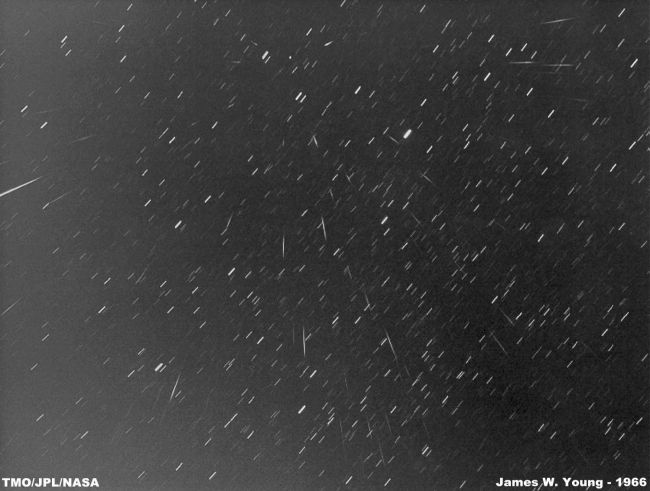 The above photograph was taken during the Great Leonid Meteor Shower of 1966. This particular
image is nearly centered on the 'radiant', that point in the sky where all the meteors seem to be falling
from. It is the point in the sky where the earth seems to intersect the orbiting particles associated with
Comet Tempel-Tuttle. The picture was taken at 1147 UT for a three minute exposure. On the original
negative, there were 88 meteors counted.

Depending upon the time of the comet's return to the earth's vicinity, this shower can be spectacular!
It was in 1833 that this shower was first discovered, and it was then quite spectacular. There is an
increase in activity of this shower every 33 years, and is now known to be completely caused by the
close proximity of Comet Tempel-Tuttle (which has a period of 32.9 years) in relation to the earth.
No one can accurately predict the if, when, and exactly where the next great shower will occur. Most
astronomers have a general feeling that on November 17, 1998 and in the Far East somewhere there
will be a substaintial meteor shower. There may well be a reasonable shower next year as well. In any
case, I will be prepared...will you? 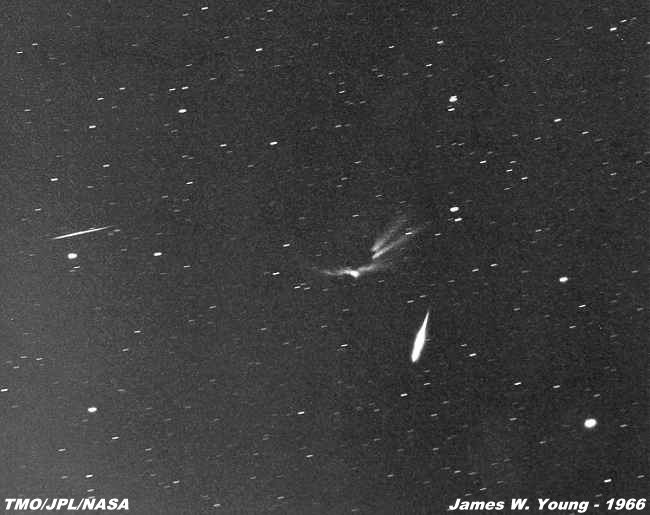 In this second picture, you can find the approximate radiant by extending lines back from the two
meteors, a point in the upper right. The meteor to the left was of magnitude 0 while the meteor just
below center was a magnitude -4 fireball. The fuzzy 'train' in the center of the frame is the remains of
a -8 magnitude fireball that occurred a few minutes earlier. Such 'trains' are basically the effects of the
high velocity winds at altitudes where the meteor ionization trails are formed. This photograph was
taken at 1252 UT. 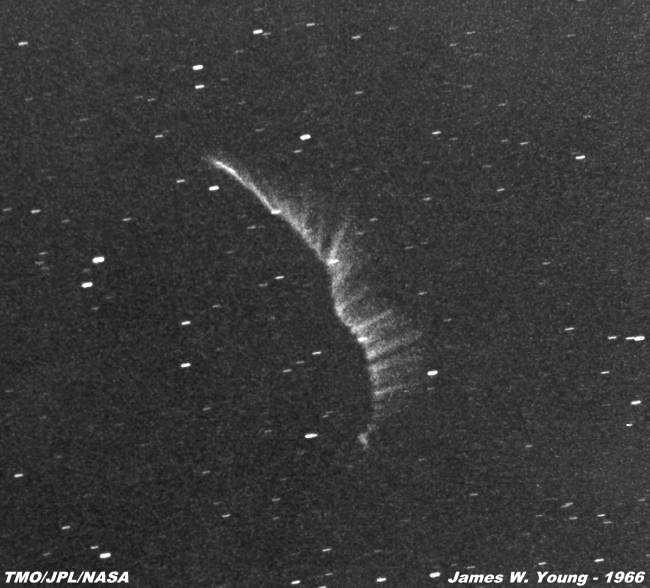 This third photograph was taken at 1258 UT for 2 minutes. This is all that remains of the ionized
trail left by a -6 magnitude fireball several minutes earlier. Looking carefully, you can see that the
path of the meteor, which came from the upper left, shows an ionized trail that spread to the right.
It also appears that the wind velocities changed considerably with altitude, since the motion of the
wind blown trail changes length and direction as the meteor got closer to the earth (lower center).

This last frame shows a -8 magnitude fireball in the upper left, and the remains of a -6 magnitude
fireball train in the lower center. This 3 minute exposure was taken at 1302 UT, only a few minutes
before twilight began. the north star, Polaris is in the lower right center of the picture.

Of all the vast numbers of meteor showers, the Leonids seem to be the fastest ones. The orbit of
Tempel-Tuttle approaches the earth from the direction the earth is orbiting the sun, therefore these
meteors are striking the earth's atmosphere upwards of 45 miles per second!