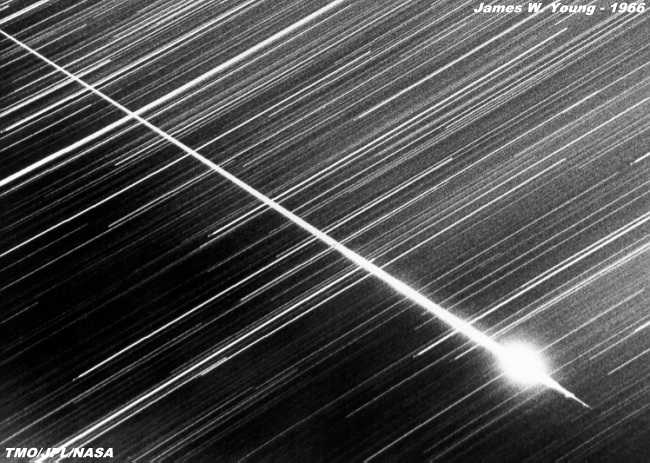 This black and white photograph of an extremely bright Perseid meteor fireball was taken on August
13, 1966 with a Zeiss-Ikon 35mm camera using a 35mm f/2 wide angle lens and Kodak Plus-X film
with an ASA of 80 pushed to 160 in the darkroom. The camera was mounted on a fixed tripod, and
the exposure was over an hour long. The zig-zag irregular appeanance of the meteor and star trails are
caused by the scanning and sizing of the image to the page.

This night I was taking long exposures, since the previous night I had taken exposures of 5 minutes
before I would advance the film and re-point the camera. It seemed like everytime I changed the
exposure, and/or pointed the camera in a different direction, a bright meteor would go through the exact
field I had just moved from!! Very frustrating, indeed. I suspected leaving the camera in the same position
for extremely long times would yield better results. The above photograph was a real piece of luck...
just as I got ready to end the exposure, this -12 magnitude fireball streaked through the camera's field
of view. The fireball was equal in brightness to the full moon. This was the third fireball seen of this
brightness...the first seen was in Portland, Oregon, in 1950...the second was seen in Seaside, Oregon
in 1958.