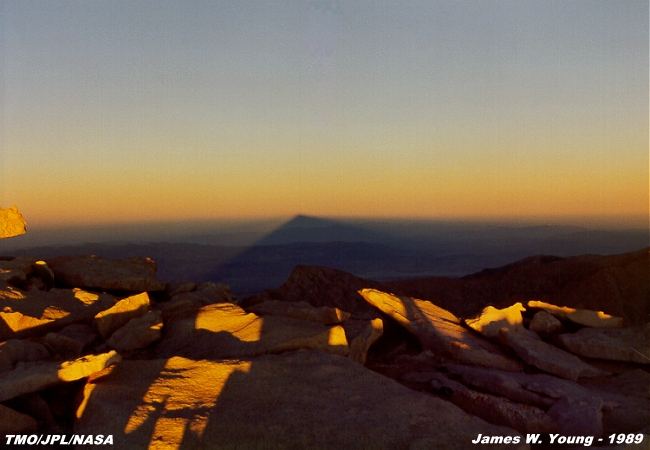 This picture was taken from the summit of Mt. Whitney on August 16, 1989 just as the setting sun
was slipping into the western horizon. The 'pyramid' shaped shadow of the mountain is seen way
off toward the eastern horizon, estimated to be some 200 miles away. Although not visible in this
picture, the eclipsed full moon is at the very 'tip' of the shadow. Our family specifically climed the
mountain to photograph the eclipsed moon (after dark), then climb back down to Trail Camp at
12,000 feet elevation. The summitt is 14, 496 feet above sea level. After it got dark, we took a
variety of pictures, enjoyed the dark (and very cold) skies. We then prepared to leave the top and
climb down by flashlight, as we had made no provisions to spend the night with little water, and no
sleeping bags/tents. Everything was set up at our campsite 4 hours and 4 1/2 miles down the trail!

After traveling only 300 feet, I found the flashlite descent was too hazardous and risky, so we turned
around and spent the night in a wooden summit shack. I had three teenaged boys, including my son,
and my 10 year old daughter. It was 28 degrees F outside all night, and not much warmer inside. We
made it through the night until 7 AM, then climbed down to Trail Camp and a much needed warm
breakfast.

In the morning after getting up we saw the full moon getting ready to set in the west, just above the
shadow of Mt. Whitney, similar to last night (toward the east). One can get an appreciation of the
moon's orbital motion around the earth by noting the moon is not at the point of the shadow of Mt.
Whitney. Since the moon moves about 13 degrees in 24 hours, the moon in the following picture is
about 6 1/2 degrees further east (from the shadow of the mountain).