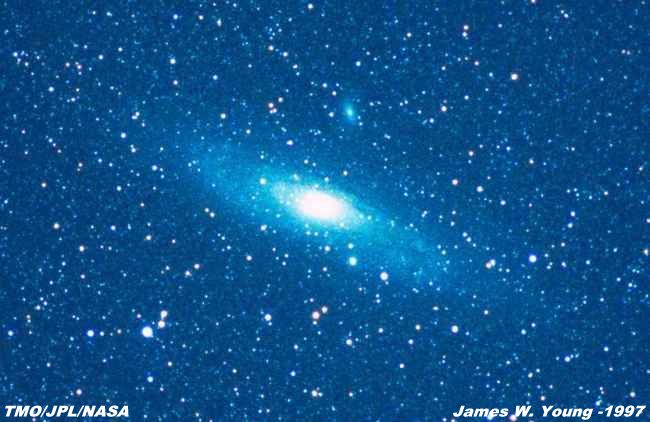 This picture was taken at the Table Mountain Observatory, by placing the 35mm camera on the
side of the 10-inch Schmidt telescope for tracking purposes. The photo was taken on September
8, 1997 around midnight local time while testing the tracking system of the Schmidt telescope.

Directly above the highly elongated Andromeda galaxy (M 31) is one of its companion galaxies,
NGC 205. The fuzzy patch just below and to the right of the nucleus of M 31, is another companion
galaxy, M 32. The Andromeda Galaxy is very similar to the Milky Way Galaxy, our own. But M 31
is nearly 2 1/2 million light years away. Since light travels 1 light year in one earth year, we are seeing
this galaxy as it actually appeared 2 1/2 million years ago. Not to worry, however, as this and most
other galaxies are many billions of years old. A typical galaxy of this type has about 100 billion stars
(estimate), and being a fairly common galaxy, one can get lost very fast when the next number, the
estimated number of galaxies in the universe, is the same number! That's 100 billion billion stars!
ENOUGH!