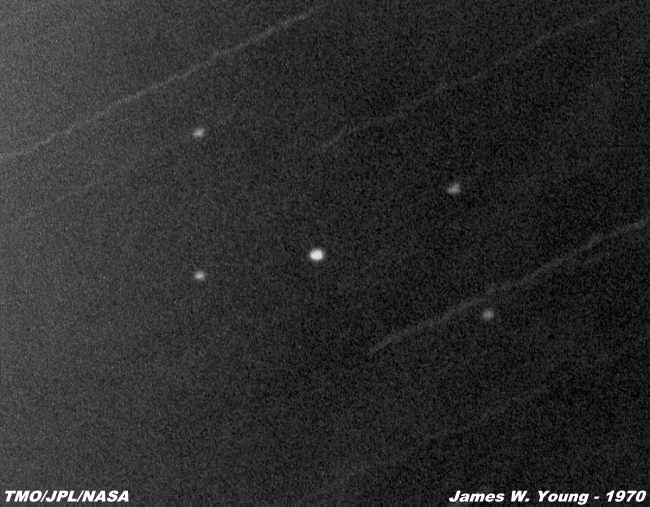 This black and white photograph was taken with a Kodak 103a-D spectroscopic 4x5 glass plate at
the f/16 cassegrain focus of the 24-inch reflecting telescope using a special 4x5 camera. This picture
was made from 0523 to 0528 UT on April 12, 1970 (5 minute exposure). This photograph was
taken nearly 2 days before the explosion of one of the on-board fuel cells that created the world-
wide intense interest and concern for these three brave men, and of course, the now famous and
quite accurate Apollo 13 movie.

A unique view of the Apollo 13 CSLM: the center dot is the Apollo 13 Command/Service/Lunar
Module (CSLM) as seen Table Mountain through the 24-inch telescope. The four dots around the
CSLM are the tumbling SLA panels. The diagonal jagged white lines crossing the picture from the
lower left to the upper right are star trails during the 5 minute exposure. The actual exposure was
taken by guiding on the distant S-IVB upper last stage spent rocket body of the Saturn V launch
vehicle. This was very difficult, since the brightness of the S-IVB was extremely faint in the 1200X
magnification guide eyepiece, thus the jagged star trailed images.

The CSLM was a steady faint dot of magnitude 13. The SLA panels are ejected from the top of the
S-IVB when the CSM detached itself from the S-IVB. The CSLM turned 180 degrees around, and
then docked with the LM (Lunar Module). The CSM, attached to the LM, then becomes the CSLM.
The 4 SLA panels, blown clear of the top of the S-IVB for the CSM to access the LM are tumbling
and, thus, appear to be flashing irregularily. The flashes sometimes appeared as bright as magnitude 9,
but flashes of sunlight onto these tumbling panels were few and far between...the reason they actually
appear fainter than the CSLM on this picture.

To see a diagram of the upper or last stage, called the S-IVB, click here. In this illustration, you can see
how the CSM (on the top) has to turn 180 degrees around, once in earth orbit, then the 4 SLA panels
are blown away, and the CSM docks with the LM. The entire package then becomes the CSLM. The
4 SLA panels are not marked in the illustration, but are the metal protection covers placed between the
CSM and the top of the S-IVB to encapsulate the LM.

During the Apollo program, I observed all of the lunar missions with the exception of Apollo 17, the last
one, because of clouds at the observatory. At first, no one was sure what we were seeing while looking
for these lunar missions. Many with small telescopes were reporting seeing the CSLM, when in fact they
were only seeing the flashing SLA panels. As the distance increased from the earth, each Apollo CSLM
appeared much further from these flashing SLA panels, so that many people, unfortunately, never saw the
spacecraft itself. Furthermore, the S-IVB was brighter that the CSLM because of its size, and many
others saw this instead of the CSLM. We observed the S-IVB and CSLM of Apollo 8 when it was
nearly 200,000 miles from the earth, but they were extremely faint, and with no sign of the SLA panels. 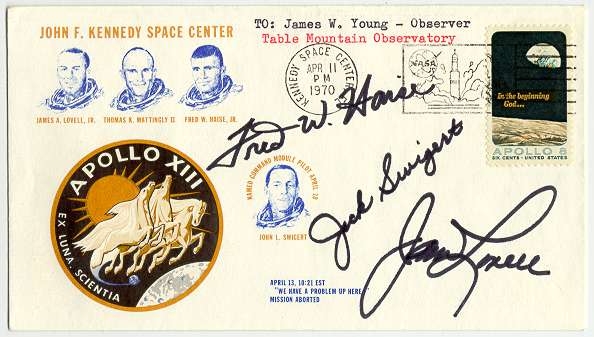