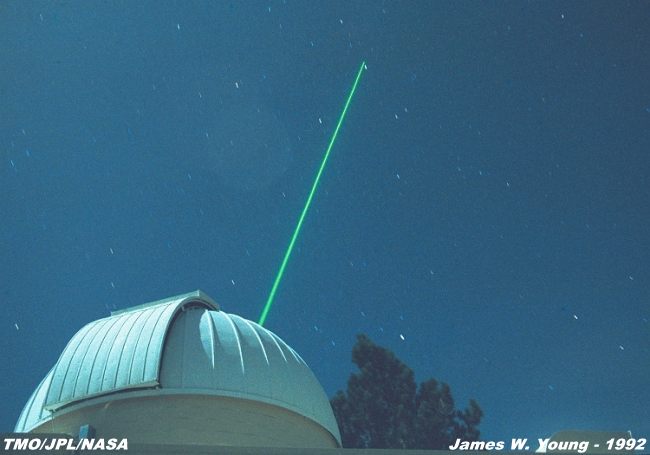 In the fall of 1992, the GOPEX (Galileo OPtical EXperiment) project was begun at the Table Mountain
Observatory by JPL and NASA Optical Communications Groups. The intention of this project was to
send a laser beam to the Galileo spacecraft, then enroute to Jupiter, and actually photograph the beam
from the spacecraft's on-board camera. The experiment was to prove that optical communications
could be done with the use of high-power laser beams using JPL's own computer controlled 24-inch
telescope at Table Mountain.

The optical alignment of the laser beam to the telescope's optics was a lengthy and arduous task taking
several months to perfect and test. Since the telescope could accurately position itself on the too-faint-to-
be-seen spacecraft, the laser had to be aligned precisely with the telescopes coude optical path. The above
photograph was taken on October 9, 1992 as pointing tests were being finalized. A Zeiss-Ikon 35mm
camera with a 35mm wide angle lens set at f/5.6 was used to capture this dazzling intense laser beam as
the nearly full moon illuminated the telescope dome. The 2 minute exposure was taken using Kodacolor
200 ASA film.

The following photograph shows the laser/optical bench set up in the observatory's coude room during
the full power test the same evening. The CW Argon gas laser is in the lower right foreground with its
beam optically controlled by a multitude of mirrors and lenses until it enters the coude telescope optical
path in the upper left center of the photograph (the beam is entering the telescope at a 34 degree angle).

During much of the testing and eventually the actual experiment (successful) in December of 1992, all
operations personnel wore protective goggles. It is noteworthy here to briefly describe the laser. The
laser pulsed at 20 Hz, each pulse lasting 10 nano seconds. The energy level of each pulse was 400
millijoules, so that the output consisted of 40 megawatt pulses. 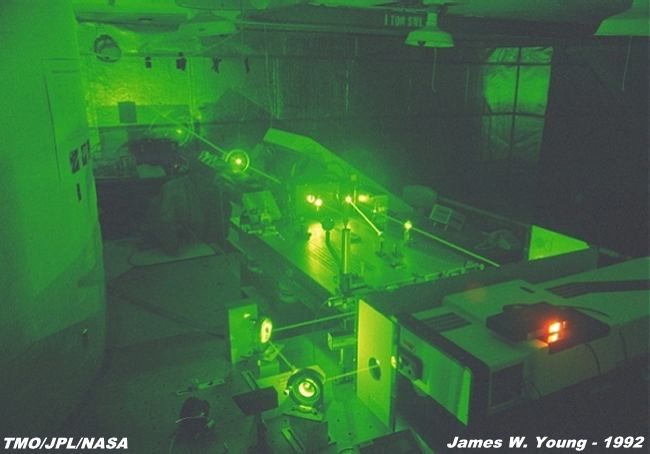 The following picture was received back from the Galileo spacecraft on December 11, 1992 through
the JPL Deep Space Network (DSN) at Goldstone, California. It was processed using a special
technique at the Image Processing Laboratory (IPL), also located at JPL in Pasadena, California. 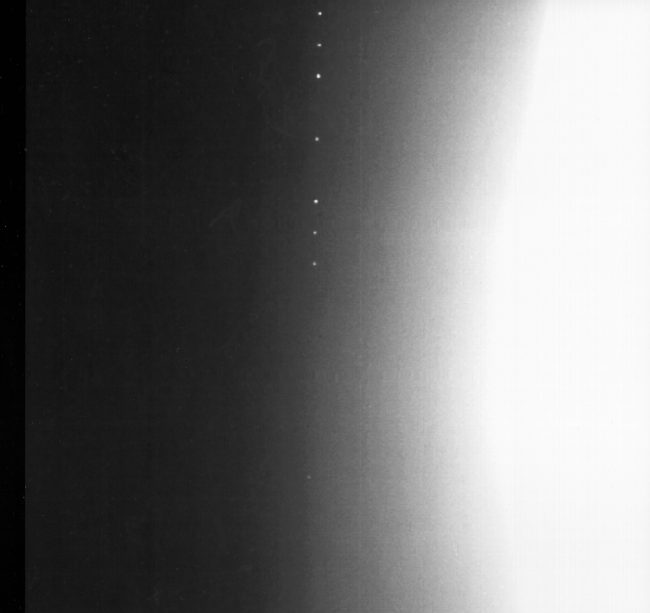 It shows the bright limb of the earth to the right side, and a series of several dots in a vertical line
from the top to the center. These dots are the laser pulses from the GOPEX laser at the Table
Mountain 24-inch telescope. The pulses were at 15 Hz, so looking carefully, one can see at least
9 dots. Those that are extremely faint, or missing, are greatly affected by the earth's atmospheric
turbulence. The Galileo on-board camera was scanned downward to separate the individual laser
pulses. The experiment was conducted from Table Mountain, as well as the U.S. Air Force Phillips
Laboratory's Starfire Optical Range near Albuquerque, New Mexico from December 9 to 17.
The Galileo spacecraft was 600,000 kms from the earth at the beginning, and moved to 6 million
kms on the last day. Because of bad weather, one day was lost, but Table Mountain hit the Galileo
spacecraft on the 6 assigned days it had.