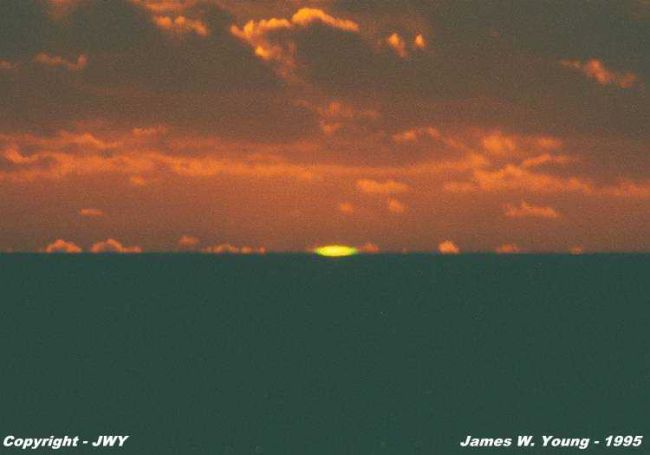 The above and following pictures were taken from the NW coast of Oregon, near and around the
Seaside/Cannon Beach area during the summer months from 1992 to 1995. The green flash is best
viewed overlooking the ocean, on extremely clear days at sunset. This phenomenon occurs as the last
part of the sun sets in the thick layers of the earth's atmosphere. Just a brief explanation about the
thickness of the atmosphere on the horizon will aide one's understanding of how this extraordinary
event takes place. Looking straight up (overhead, or to one's zenith), you are essentially looking
through 1 layer of atmosphere. This is commonaly called 'one (1) air mass'. But looking out across
the ocean from sea level, the amount of atmospheric 'thickness' just above the ocean is equivilent to
an air mass of 107! This concentrated atmospheric thickness acts like a weak prism, so that as the
sun sets, the last sliver of the sun's disk is broken up into a mini spectrum. Since the green light (the
predomonite color the eye is sensitive to) along with the blue is refracted slightly more than the red
end of the spectrum, they remain visible for up to a few seconds longer, thus the brief 'flash' of color.

DO YOU WANT MORE?

Finish looking at the pictures on this page, but if you want more information, look here for a more
in depth explanation of this often mis-understood phenomenon, as well as links to additional 'green
flash' pictures. If you do so, you will notice the author's name in also "Young". Although of no
relation, we worked together at Table Mountain some 25 years ago!

It should be noted that the green flash happens only when the conditions are just right for you, the
viewer. Typically, I see the green flash only once out of every three sunsets I specifically study. The
art of photographing them is to shoot as many frames in as short a time as possible, and look for the
results after the film is processed.

Whenever I am in Seaside, and the weather and sky conditions are favorable, you know exactly what
I am doing at sunset! I will almost give up anything else to attempt to photograph a 'great' event. I know
great green flashes occur, because the one day I couldn't give up something at sunset (my daughter's
family dinner before her wedding) was the most remarkable brilliant green flash I have ever seen! Her
dinner party was held at the Shilo Inn Restaurant in Seaside, situated some 500 feet from the ocean to
the west. With perfect conditions, but bound to my seat as 'father-of-the-bride', we all watched the
sun set while we ate dinner. Along with the other 100 plus patrons in the restaurant at the time, we were
all overwhelmed as that particular green flash caused the entire restaurant interior to turn a brillant and
awsome emerald green for about 1/2 second!!

Here are three more photographs, the last one showing that sometimes the 'flash' can and does occur
just above the ocean, when sections of the sun seem to 'break' away from the main disk. These pieces
sometimes turn green as well, since the prismatic acting atmospheric layers work their marvel 1/2 to 1
degree above the ocean level. 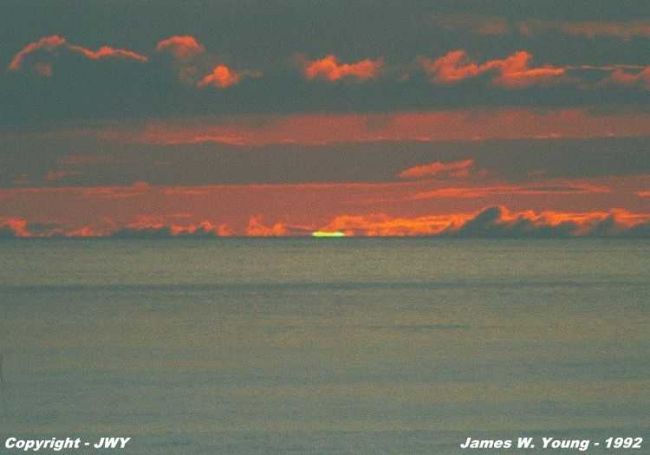 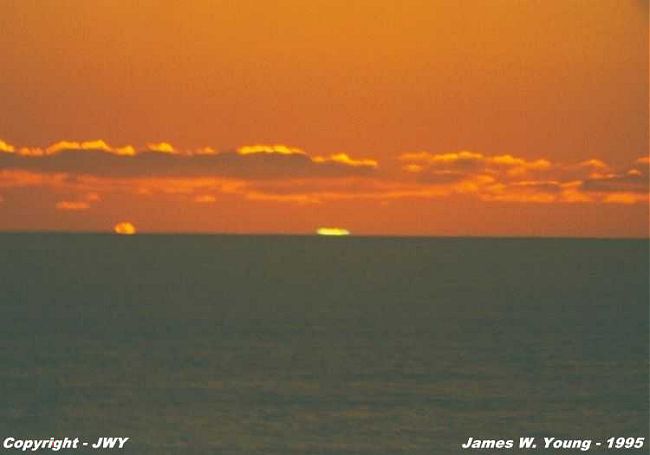 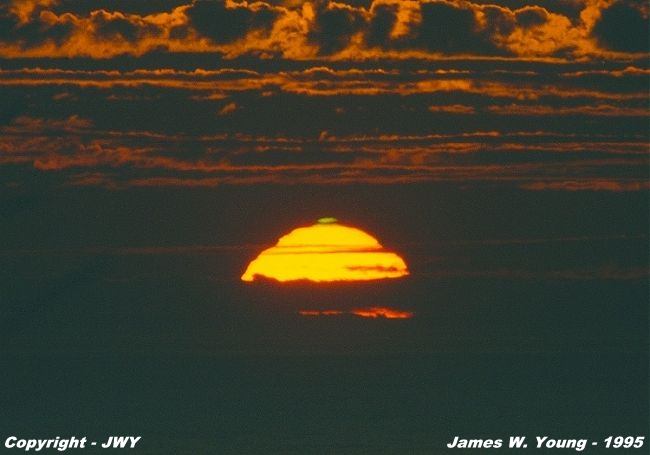 CAUTION: Never look directly at the sun! Someof the time as the sun is setting, there is enough
atmospheric density to allow one to look directly at the sun's disk, but only for short glimpses! One needs
alot of experience to know when or when not to look at the sun. Filters are still the best way to view this
event, but use neutral density filters, rather than 'green' sunglass filters. When there is an obvious increase
of atmospheric density, looking directly at the sun at sunset can be safer than at other times. The green
flash can be exciting, but never at the cost of your permanent eyesight!