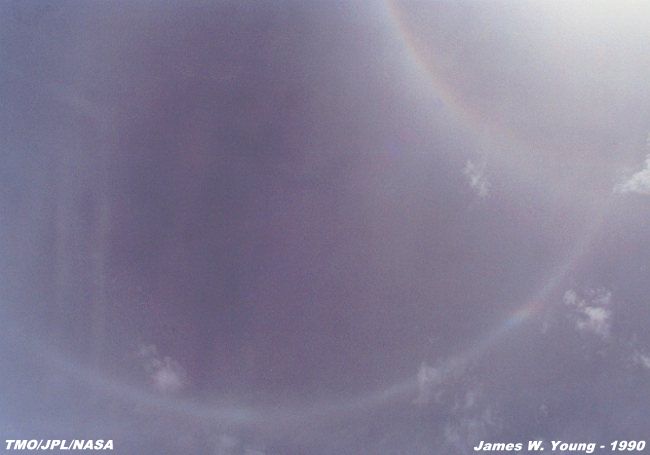 This picture of an atmospheric 'halo' was taken at Table Mountain on March 23, 1990. The typical
halo around the sun, caused by ice crystals high in the atmosphere is seen weakly in the upper right
of the photograph, the sun being off the picture to the upper right. Part of this 'halo' appears to be
'rainbow' in nature, with much coloration, and common with a standard halo. The halo is seen at the
normal 22 degree distance from the sun, and is referred to as a 'refraction halo', the most common.
The larger halo extending from the left side down and around to the right side, intersecting the normal
halo and intersecting the sun is called a parhelic circle. This halo is caused by the sunlight reflecting
off the vertical faces if ice crystals.

See the following link to a German site about atmospheric phenomenon that has some great pictures
of all types of halos. Click here !

There were many types of clouds in the sky that noon, with a lot of haze as well. It was several weeks
later during a trip to JPL in Pasadena, the sky was full of several bright halos, arcs, and many unusual
thin clouds. Some of the arcs had extremely rich 'rainbow' colors. Where was my camera? At the
observatory, naturally!