Argon Laser as Seen from the Moon 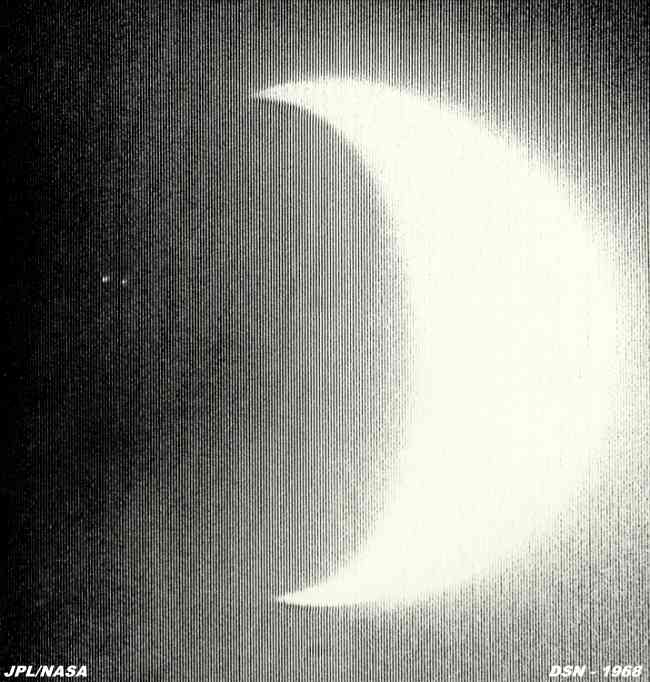 This photograph was taken by the on-board TV camera on the Surveyor VII spacecraft on January 21,
1968. The TV signals were sent back to JPL's Pasadena facility via the Goldstone Tracking Station near
Barstow, California. The TV images were saved to a video recorder, and later transferred, frame-by-
frame to 70mm black and white film. This frame is only one of the thousands of slow-scan images that
were returned and saved. The TV scan lines on the original image interferred with the scanner process
used to make the above image.

The image is of the crescent earth (not moon) as seen on the right, a small black artifact is seen just above
center, and the two laser beams are to the left center. The left hand point is the laser from Table
Mountain and the other is from the Kitt Peak facility. The beams were equivilant to a first magnitude
star, as seen from the lunar surface.

During much of the TV imaging, Table Mountain's telescope was scanned from left to right to determine
the size or width of the laser beam. The laser beam left the telescope as a 24-inch diameter colimated
beam of light. As it passed through the earth's atmosphere, the beam was apparently dispersed, and thus
causing a larger sized image as seen from the moon.