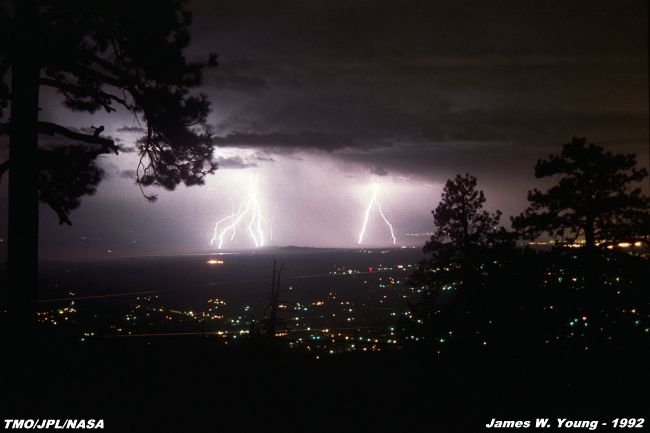 This picture was taken October 23, 1992 from the observatory grounds overlooking the Mojave
Desert to the north-northeast. By this time I was not only taking 'stills', as above, but I was also
now shooting video. The photo above was the only good picture I took...as I spent most of the
time taking video shots. Playing back the video at slow motion speed, reveals the true nature of
the lightning 'strikes' as many individual strikes. Terminology is difficult, but what we all commonly
call a 'lightning bolt' can really be made up of many separate 'strikes'. One such 'bolt' recorded on
video this particular evening, showed 11 individual 'strikes' of varying intensity.

Some twenty years earlier, long before inexpensive video cameras, I would move my 35mm camera
back and forth while keeping the shutter open for a time exposure. When a 'bolt' occurred as the
camera was in motion, the developed frame would reveal several 'strikes' all following the exact
same pathway to the ground. The picture below, an old black and white, was taken sometime in
1966 from the observatory. You will see 8 individual strikes from the actual lightning bolt, while
the camera was moved.