The Lunar Crater Aristarchus with Schroter's Valley and the Cobra-Head 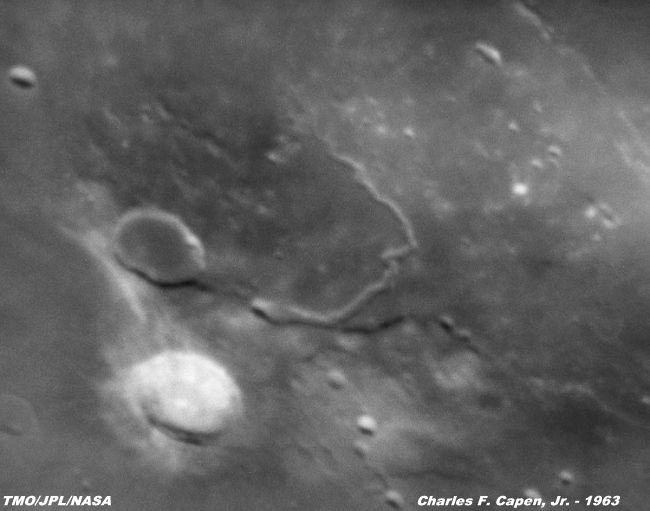 This remarkable black and white photograph of the crater Aristarchus was taken with Kodak Panatomic-X
35mm film with a Zeiss Ikon 35mm camera at the f/20 focus of the 16-inch reflecting telescope on October
1, 1963 at 0658 UT. The exposure was 0.2 seconds, and used a Kodak Wratten #4 filter. The 'seeing' was
extremely good, and the detail shown on the original negative recorded craters as small as 1 mile in diameter.

The bright white crater in the lower left is Aristarchus with a diameter of 29 miles. The walls rise about 2000
feet above the surrounding plateau. Aristarchus is the brightest feature on the surface of the moon. Just above
Aristarchus is the crater Herodotus with a diameter of 23 miles. Curving downward from the upper center to
the plateau at left center between Aristarchus and Herodotus is Schroter's Valley, the first lunar valley to be
discovered (1787). The valley ends at a small crater and has the appearance of a 'cobra-head'. Although no
figures are quoted, the valley seems to be in excess of 100 miles in length. South is to the left, east to the top.