Mare Nubium and the The Straight Wall

The Straight Wall in Mare Nubium with the Crater Pitatus 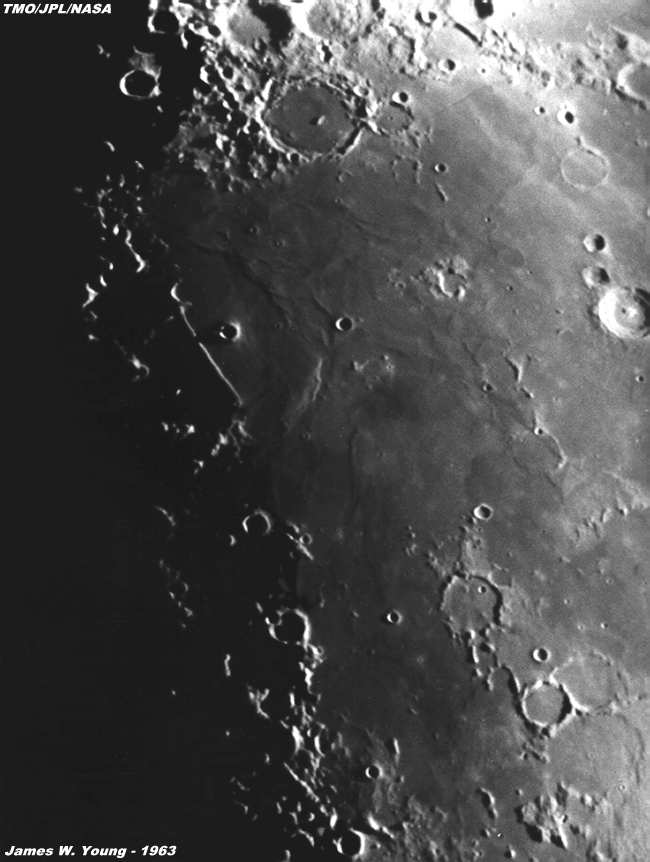 This black and white photograph of the Straight Wall was taken with Kodak Plus-X 35mm film with an
ASA of 80 using a Zeiss Ikon 35mm camera at the f/20 focus of the 16-inch reflecting telescope on July
14, 1963 at 1103 UT. The exposure was 1/2 second, and used a Kodak Wratten #4 filter. The 'seeing' was
extremely good, and the detail shown on the original negative recorded craters as small as 1 mile in diameter.

In the upper left center of the picture is the famous 'Straight Wall', an actual fault in the western side of Mare
Nubium some 60 miles in length. This 'wall' is 800 feet high in its center. The crater Birt is just to the right
(east) of the Straight Wall. Birt's crater floor lies some 6000 feet below its wall crest. Careful examination
reveals a shadow cast by this crest all the way to and over the Straight Wall since the sun is very low in the
east (right). The large 50 miles in diameter crater, Pitatus, is at the top center, while the 39 mile in diameter
crater Bullialdus lies at the upper right center edge. The shallow crater Guericke, 36 miles in diameter, lies
in the lower right center. The SW corner of large Mare Nubium occupies most of the picture. South is at
the top.