The Lunar Walled Plain, Plato with Rim Shadows Across its Floor 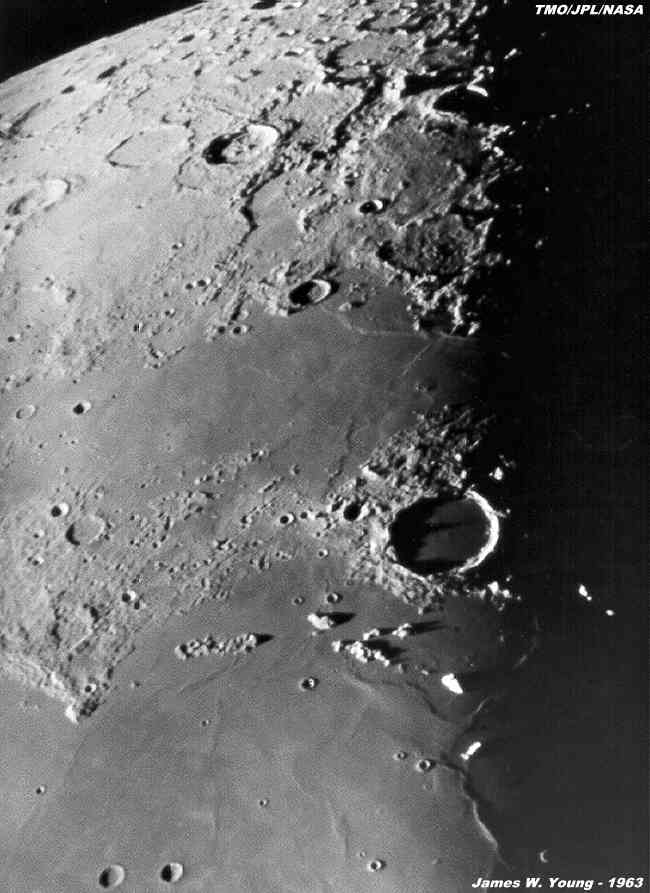 This black and white photograph of the walled plain Plato was taken with Kodak Plus-X 35mm film with
an ASA of 80 using a Zeiss Ikon 35mm camera at the f/20 focus of the 16-inch reflecting telescope on July
14, 1963 at 1055 UT. The exposure was 1/2 second, and used a Kodak Wratten #4 filter. The 'seeing' was
extremely good, and the detail shown on the original negative recorded craters as small as 1 mile in diameter.

To the right of center is the 60 mile diameter walled plain Plato. In this photograph north is at the top, and
east is to the left. The sun is just rising in the floor, and upon careful examination, one can see the long black
shadow from the east rim mountains extending across the floor almost to the far side (right). Those high rim
mountains are 7000 feet above the floor of the plain. Just below (south) of Plato is the small mountain Pico.
The central peak rises 8000 feet above the surrounding lunar surface. To the bottom is the northern edge
of large Mare Imbrium.

Just to the top center is the small 23 mile diameter crater Fontenelle, and still further north (top left center
edge) is the crater Philolaus with terraced walls rising an incredible 12000 feet above its floor. Philolaus is
46 miles in diameter. Between Plato and Fontenelle lies Mare Frigoris.