The Lunar Apennine Mountains and the Walled Plain Archimedes 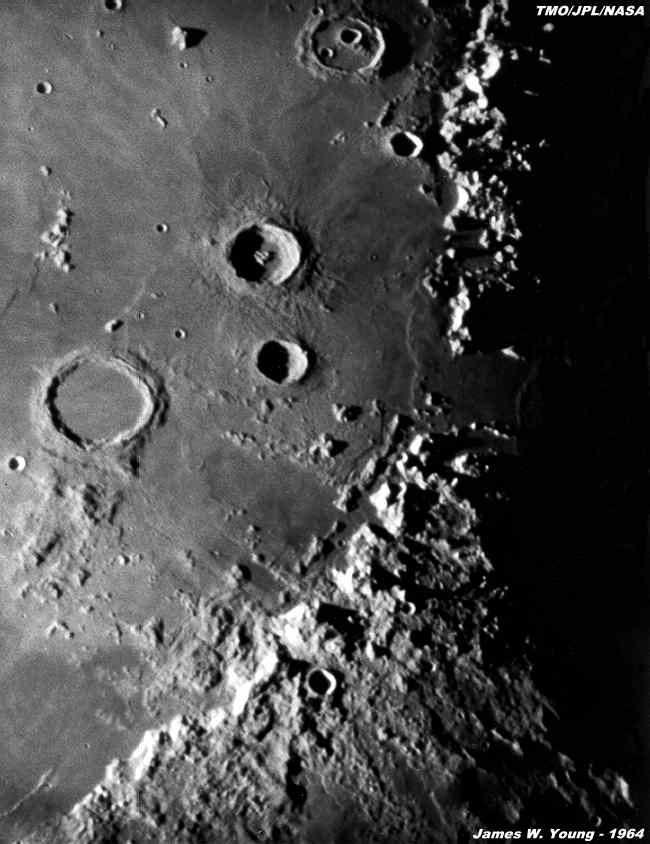 This black and white photograph of the Apennine Mountains was taken with Kodak Panatomic-X
35mm film with an ASA of 25 using a Zeiss Ikon 35mm camera at the f/20 focus of the 16-inch
reflecting telescope on August 29, 1964 at 1052 UT. The exposure was 1/4 second, and used a
Kodak Wratten #4 filter. The 'seeing' was extremely good, and the detail shown on the original
negative recorded craters as small as 1 mile in diameter.

The large walled plain on the left center edge is Archimedes with a diameter of some 62 miles. This
and Plato are two of the best examples of 'walled plains'. We associate 'craters' with young impact
lunar features; the result of impacts from debris during the cooling process of the lunar terrain. It is
believed that the 'walled plains' are much older craters that have been subsequentially filled in with
lava from the one time lunar volcanic activity stage of the moons evolution. The center crater is the
24 mile diameter Autolycus, some 24 miles in diameter with walls rising to a height of 9000 feet above
the crater floor. Just above Autolycus is the 35 mile diameter crater Aristillus with walls rising to over
11000 feet above the interior floor.

The large Apennine Mountain range curves across the picture from the center to the lower left (east).
Several mountains along this 300 mile ridge are Mt. Huygens at 18500 feet, Mt. Bradley at 16000 feet
and Mt. Hadley at 15000 feet. Further north (top right center to top right) are the smaller Caucasus
Mountains.