The Planet Saturn with the Rings Viewed Edge On 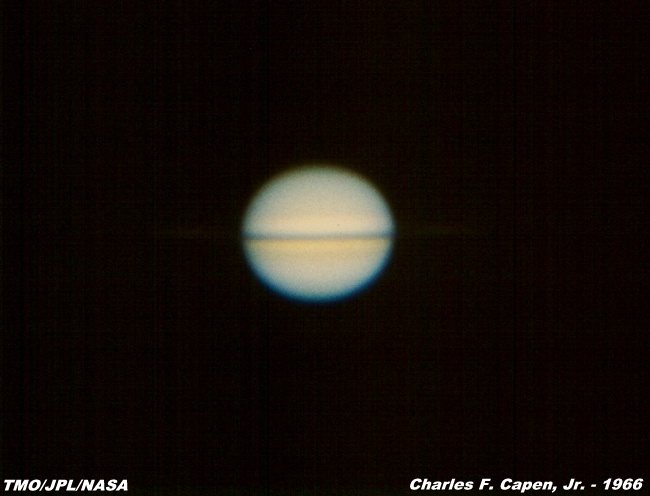 This photograph of Saturn was taken with Kodak Kodachrome-X 35mm film with an ASA of 100
using a Zeiss Ikon 35mm camera at the f/16 focus of the 24-inch relecting telescope on July 27,
1966 at 1126 UT, by Charles F. Capen, Jr. The exposure was 12 seconds and used a Kodak
CC10Y color compensating filter. A 4X barlow lens was used to increase the effective focal ratio
to f/84 under very good seeing conditions.

Saturn's rings are very difficult to see as they encircle the planet in this rather long planetary exposure.
Because the Earth, Sun and Saturn's rings were nearly in the same plane at the time of this exposure,
the rings become very difficult to see. Look carefully, for they are there, as an extremely faint straight
line extending to the left and right of the planet.