The above picture was taken on May 3, 1990 in Wrightwood, California during extremely clear and
calm weather. The sky was a very deep blue, and a thin vertical layer of cirrus crossed the sky around
noon. When the layer got east of the sun, I could see a weak indication of a parhelic circle. Once the
cirrus got 22 degrees east of the sun, a bright rainbow colored 'sundog' appeared. The intensity was
astounding, but moreso was the rainbow color orientation! It was vertical rather than horizontal. Why?
As you look carefully, you can see the parhelic circle extending left (away from the sun), and itself is a
rainbow color. 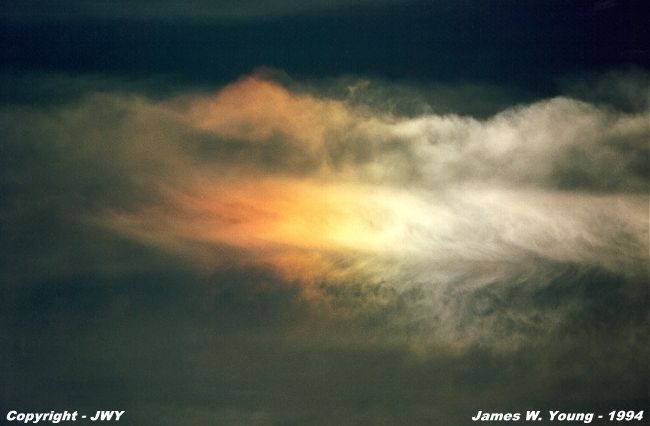 This photograph was obtained while I was aboard the RMS 'Queen Mary' in Long Beach, California
on February 25, 1994. A more typical 'sun dog' or mock sun, but intensly bright. No other halo arcs
or coloration seen elsewhere. 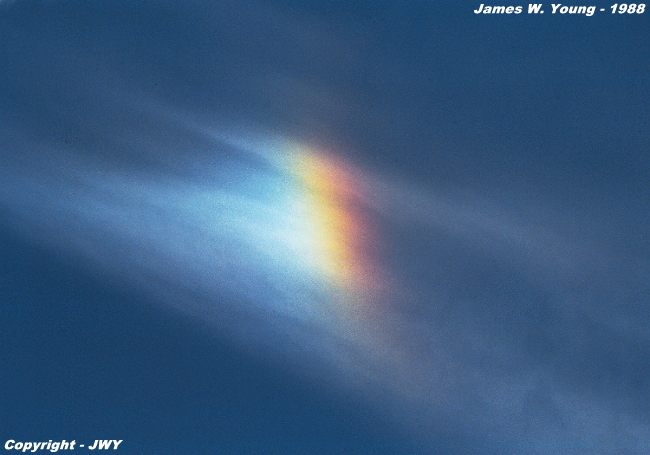 This picture was taken in Wrightwood, California on January 14, 1998. This 'sun dog' was intensly
bright in the blue color (left), but more unusual was the apparent curvature pattern of the rainbow
and its orientation.