In this second series of pictures, JPL continued to expand its use of the mountain for various
scientific programs, and long-range plans for the future site development. The picture below,
an aerial view, shows the 16-inch telescope building in the upper right center, and the solar panel
testing site in the lower left foreground. Solar panels for various JPL unmanned spacecraft were
tested and developed here in the early to mid '60s. Later, a site specific for panel testing was
developed at a slightly lower site to the south, so as not to interfere with any of the optical
astronomy programs. 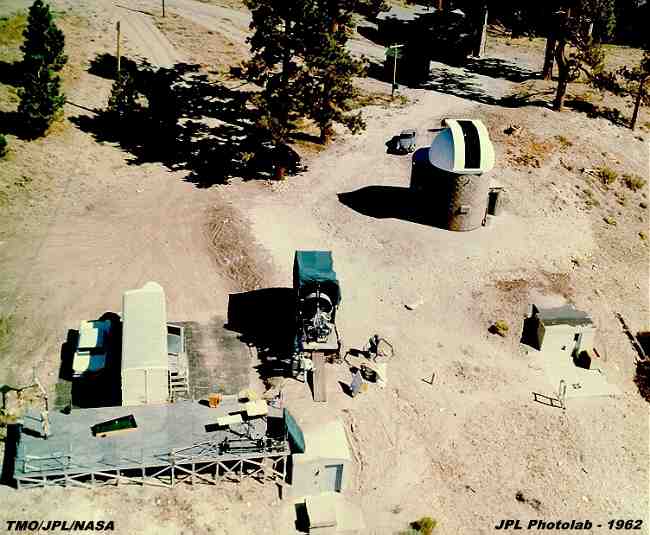 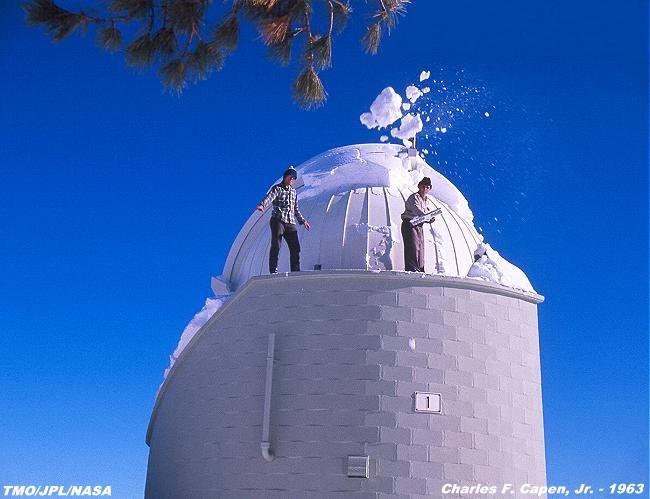 One of the requirements after a heavy snowstorm, but usually only for wet snow, was the tedious
task of snow removal from the dome. I am pictured on the left, and Jack Lyon, the caretaker and
maintenance man is shoveling the snow to the photographer, Mr. Capen, the new Resident
Astronomer. I was his assistant and darkroom technician, having come to the facility in November,
1962. 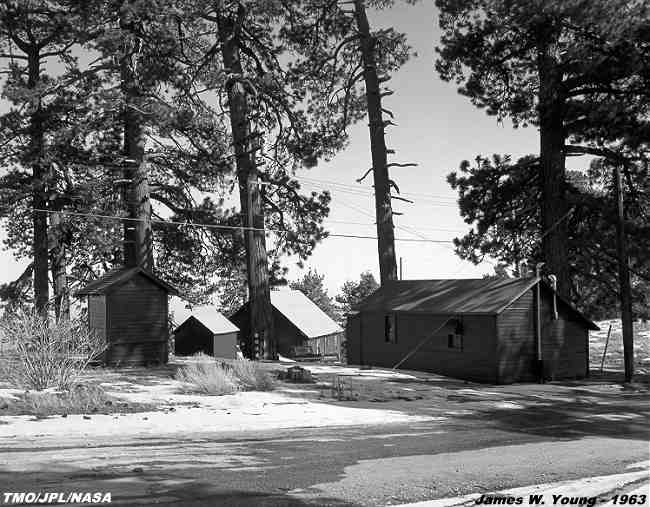 This picture above, and the two following pictures show some of the original Smithsonian buildings
that were converted into working additions of the new JPL site. In the above photo, the larger of
the buildings, just left of center in the background, is the newly remodeled residence of Mr. Capen
and his family. The building to the right foreground, an original small residence, was later converted
to the Site Manager's office. In late 1964, Mr. Earl S. Ivie was transferred from JPL to the town
of Wrightwood, and took over the responsibility of managing the site operations. 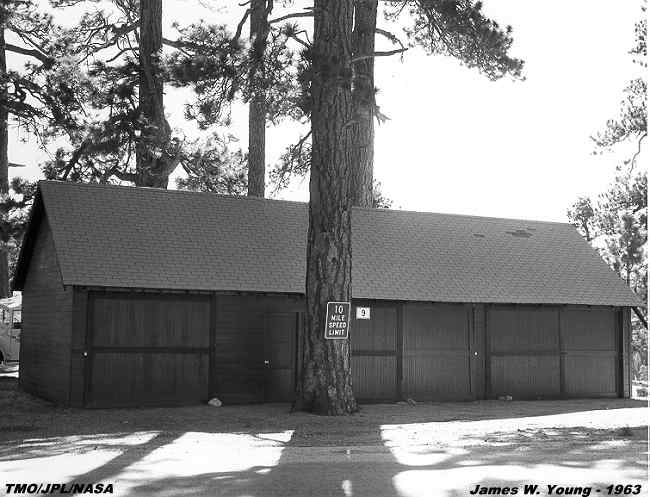 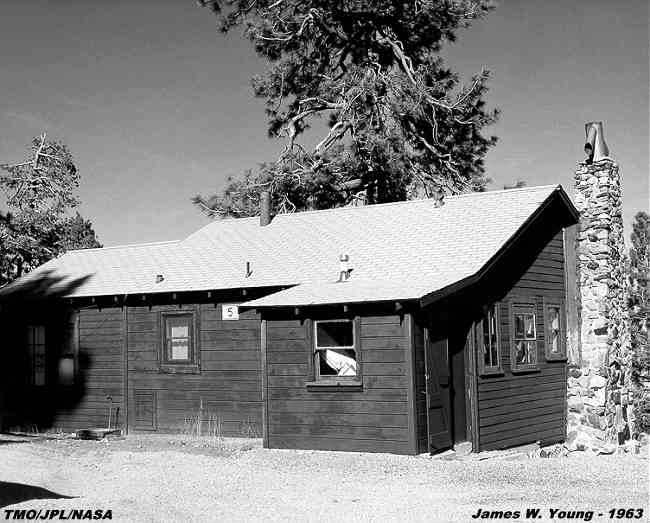 This older residence was converted into the new operations building for a small radio-science
8-foot dish for radio astronomy.

In the fall of 1963, one of the most beautiful scenes on the short 6 mile drive from Wrightwood
to Table Mountain, was the beautiful setting of the Big Pines Ranger Station. To the left is an old
recreational hall used as a restaurant and dance hall in the 1930's, but unused now. The 1936
winter Olympic trials were held just 1000 feet south of this station at the Blue Ridge Ski Area
(now called Mountain High). The restaurant /dance hall was a booming operation way back then!
Part of the ranger station burned to the ground in 1983. 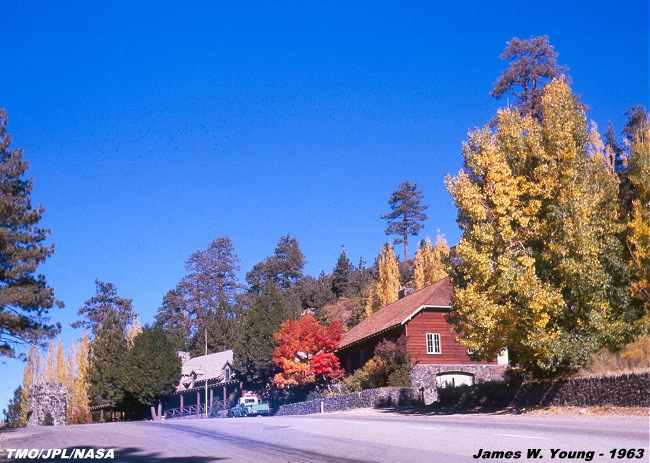 The following picture is another aerial view showing the site in 1964. To the lower left is the old
tennis court for the Smithsonian facility. This was the area later developed for the modern
headquarters building. In the lower center is the in-progress construction of a 240,000 gallon
water tank for us and the surrounding Forestry use facilities. The site had been relying upon two
1200 gallon water tanks, filled by a very antiquated model-T Ford engine pumping station off
the site. In the winter, getting to the pumping station, let alone starting the pump (engine) in cold
weather, proved too difficult for the greater needs of the expanding site. The new water tank would
have its own automated pumping facility (still in use today, 1998). In the upper right side is a new
Butler building, TM-2, housing solar test instruments, such as the Active Cavity Radiometer
Irradiance Monitor II (ACRIM II). Below this picture is a close-up view of the new water tank
construction. 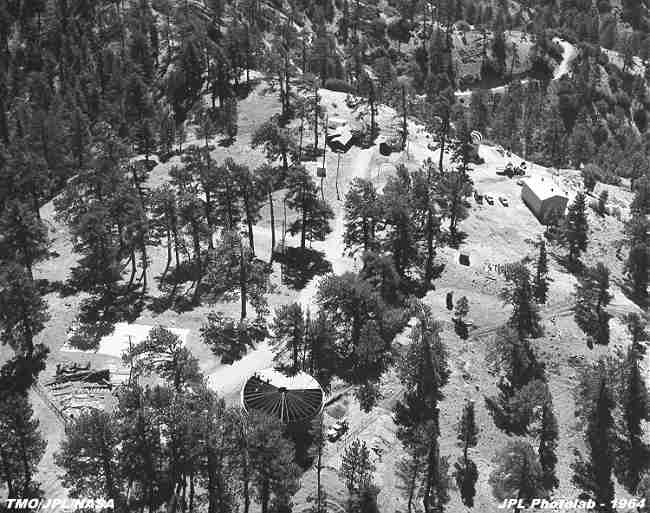 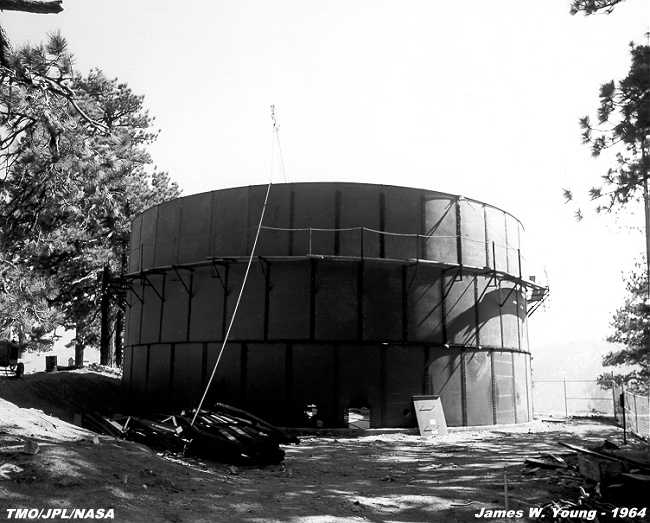 In April, 1965, the Butler building (TM-2) has been removed and moved to a newly developed
solar test site, about 1/2 mile to the east, and only 100 feet lower in elevation. This additional
aerial shot shows TM-1, the 16-inch telescope building in the center, the radio astronomy dish
in the upper right center, and its operational buildings just behind TM-1. In front of TM-1 are the
two original bunkers used by Smithsonian. In the upper left are the office building and resident
quarters for Mr. Capen. In the lower left center is the area being readied for the 24-inch telescope
building, which was finished in the fall. The new and larger telescope was delivered and placed
into operation in March 1966. 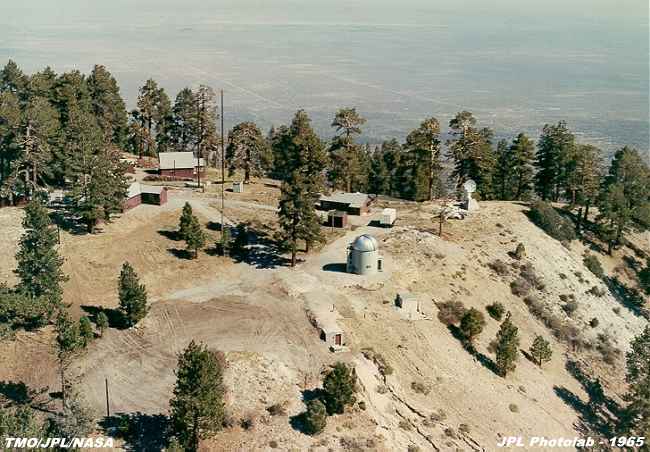