The above picture shows the 40-foot planetary spectrograph used with the 24-inch telescope
facility. This device employs a 12" x 14" single grating with 600 lines per millimeter. In the 4th
order spectrum, the resolution is around 1.2 angstroms/millimeter. During the 1970's and 80's,
spectroscoptic studies of the carbon dioxide context of the Venusian atmosphere were made
in the near-infrared wavelengths. As time progressed, different detectors were used to study
the methane and ammonia content of the Jovian planets. Eventually, an exhaustive study of the
sodium emission from Jupiter's satellite, Io, was observed with an imaging photometer. Results
allowed astronomers to see a 2 demensional profile of the sodium cloud, and Jupiter's influence
upon its size and shape. Over an extended period of time, a 3 demensional picture could be
analyized over the complete orbit of Io around Jupiter.

In the late 1980's, the ACRIM II facility was in full operation at a site slightly lower, and to the
east of the main Table Mountain facilities. In this aerial view, the solar tracker is seen outside of
the 'butler' building 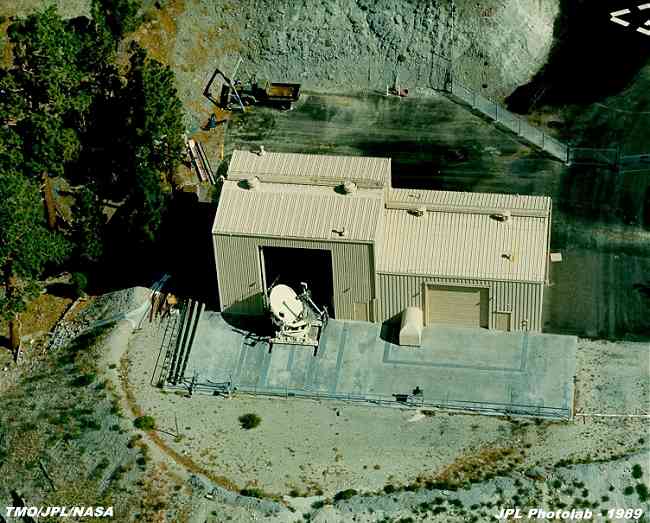 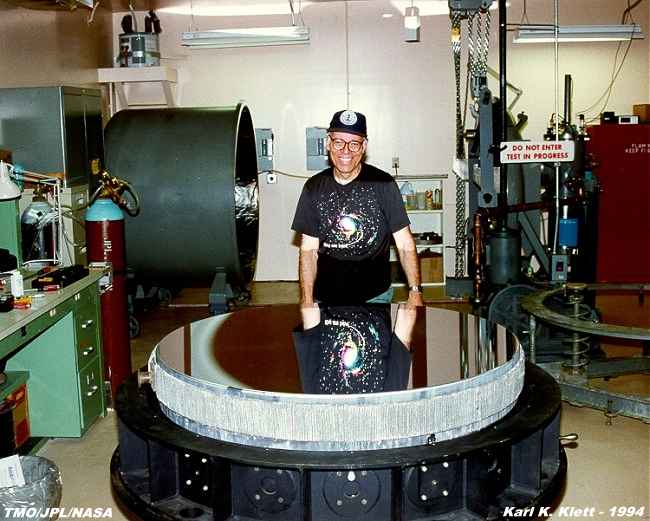 In the above picture, I am seen smiling after our first attempt at aluminizing the big 48-inch mirror
of the new 48-inch telescope facility (completed a few years earlier). The 48-inch telescope came
from Cloudcroft, New Mexico. It was a Department of Defense satellite tracking instrument, moth-
balled after being taken out of service. JPL acquired the instrument, along with the vacuum chamber
(seen in the background) to aluminize the mirror. The mirror weighs 1063 pounds, and its removal,
cleaning, placing in the chamber, and re-installing back in the telescope is a three-man operation
taking 3-4 days. After receiving extensive training, and seeing the results of the finished job, you
can understand why I am smiling. This picture was taken in May, 1994, just before the mirror was
re-installed into the telescope.

In the next two aerial shots from the JPL helicopter, the current Table Mountain Facility is seen
almost as it is today. Both pictures were taken in September, 1995. 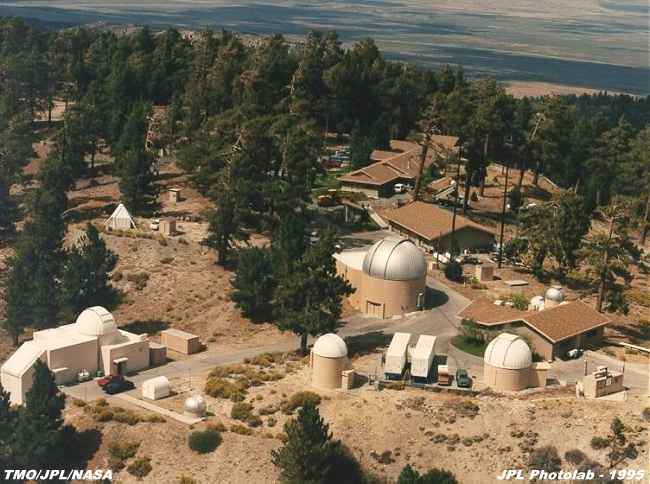 The first picture shows the site looking NW. From left center, and running counter-clockwise, we
see the 12-inch transit instrument of San Diego State University used to measure accurate transit
times of Uranus and Neptune. To the lower left, the fully developed 24-inch telescope facility. The
very small bread-box shaped building is an automated telescope that measures cloud cover over
the site 24 hours/day. Just next to it, the small round dome houses the 10-inch Schmidt camera.
In the lower center, is the original 16-inch telescope facility constructed in 1962. It now houses
a heliostat for solar work. To the right are two trailers housing a mobile LIDAR (laser radar)
facility, that is presently in full operation on the island of Hawaii. Further to the right, is the 40-inch
telescope facility of Pomona College. Behind that dome is the fixed Table Mountain LIDAR
facilities building. Just slightly right of center is the large 48-inch telescope facility. Behind that
dome is the new garage and machine shop. Directly behind the garage is the main headquarters
building. The Mojave Desert floor is seen in the upper background, some 4500 feet lower in
elevation. 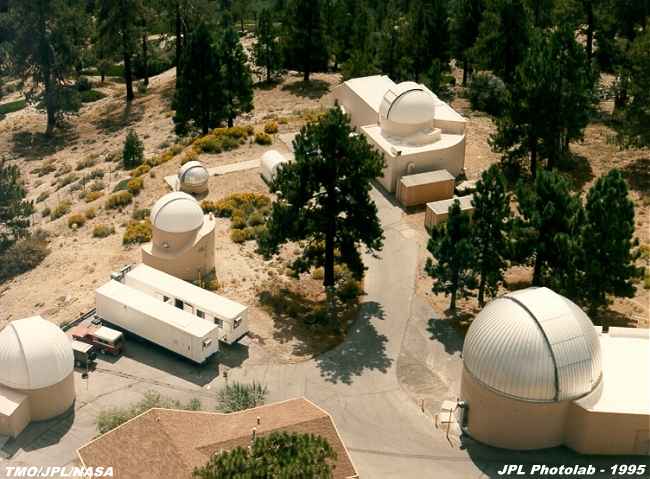 In the picture below, the 48-inch facility is seen as of October, 1998. In the past few years,
air conditioning units have been added to both the 24 and 48-inch facilities. The telescopes
operate with far better 'seeing' conditions now that the dome interiors are 'conditioned' to the
expected night-time temperatures each day preceeding observations. These A.C. units can be
seen to the lower right of this building. 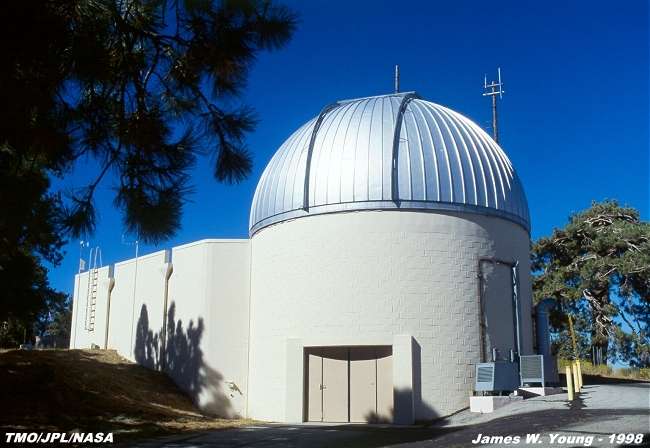 This last picture, taken in late 1998, shows the same area as in a picture taken in 1962. Click here
for a comparison. Note the tree growth just in front and to the right of the 24-inch facility building
during the past 36 years! 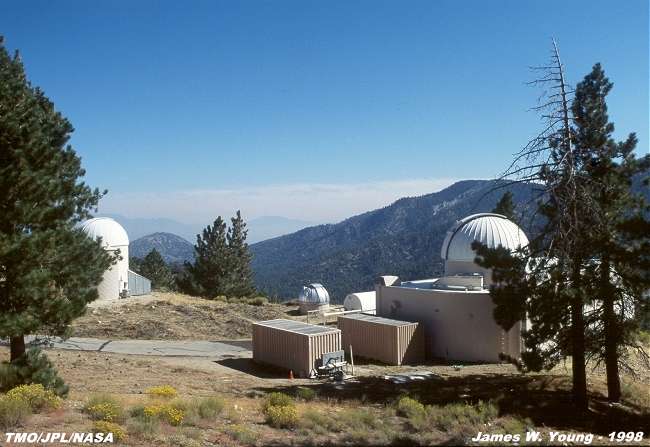